All Set to Launch ‘Exercise Cormorant Strike X - 2019’ in September

One more milestone project of the Sri Lanka Army, ‘Exercise Cormorant Strike X - 2019', the joint mega Tri-Service Field Training Exercise (FTX), organized for the 10thconsecutive year will kick off on 3 September with a record participation of more than 100 foreign military participants and observers, in addition to 2400 Army personnel, 400 Sailors and 200 Airmen, announced during a Media briefing held this evening (26) at Hotel Kingsbury.

Major General Laksiri Waduge, Exercise Director, ‘Exercise Cormorant Strike - X’ briefed the Media with a slide presentation at the beginning of the introduction.

Lieutenant General Shavendra Silva also joined him explaining the significance of the FTX through which he said a productive exchange of experience and new strategies can be learnt. A detailed press communiqué distributed during the occasion gave comprehensive information on the conduct of the Exercise during 3 - 24 September 2019 as follows;

Over the years, this Field Training Exercise, a conceptual notion of the Army has evolved as one of the most consistent and comprehensive training Exercises which transfers and shares invaluable military experience and knowledge in a multinational milieu for the benefit of future military aspirants in the next generation and the foreign military participants.

The FTX will continue until 24 September 2019 covering the Eastern, Central, Western and North Central Provinces and provides a catalyst to build the capacity of Special Operations Forces (SOF) of the Army and formulate a theoretical framework for the employment of SOF.

This year’s Exercise portrays counter-insurgency scenario with the influence of asymmetrical warfare which has turned out to be the common approach among most non-state actors, extremist groups and appears to be the most likely national and international security threat in the 21st century.

The Exercise also largely focuses on joint planning and coordination, pre-engagement training, staff functions, real-time role play and execution of special operations within the given framework.

Exercise setting has been developed under the guidance of the Commander of the Army, Lieutenant General Shavendra Silva and under the close supervision of the Exercise Director, Major General Laksiri Waduge, Commander, Security Forces, Central and a special committee. The Exercise will start from the mock Operational Headquarters at Minneriya on Tuesday (3 September) after a brief induction ceremony at Minneriya.

Using SOF tactics, Commandos, Special Forces, Air Mobile and Mechanized Infantry Regiment troops of the Army, Sailors and Airmen would actively participate in this Exercise and the SOF will deploy troops under command on special operations tactics, techniques and procedures in the Operational Framework (Deep, Close and Rear) during the Exercise.

Foreign military participants and observers from Malaysia, Maldives, Nepal, Russia, USA, Bangladesh, China, France, India, Iran, Pakistan, UK, and Zambia have so far confirmed their participation. Through execution of 20 special operation missions, the participants are expected to stick to above-mentioned core tasks throughout the FTX.

The Field Training Exercise terminates with the ‘Critical Engagement’ on September 23 at Kuchchuveli. This has been planned as a joint operation against opposing force stronghold supported by Naval, Air Task Forces and Mechanized Infantry troops. Thede-brief of the Exercise will take place on 24 September 2019 upon completion of the Critical Engagement as the final mock segment.

The Commander of the Army maintains that Sri Lanka Army, having defeated the world’s most ruthless terrorist outfit should sustain the status quo and be always well –geared to take on any future challenges against the country or her people as defenders of the nation. trace affiliate link | Sneakers 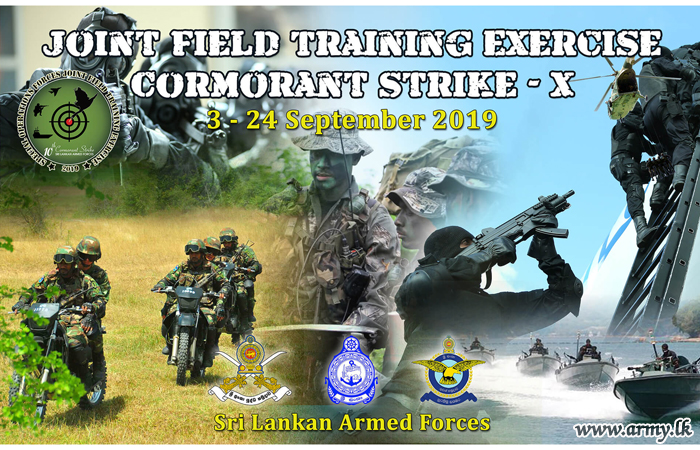