One more 5-member group of Regimental Sergeant Majors (RSMs) of the Army, ready to leave for India under the Army to Army interactive programme, introduced by the Commander of the Army for the first time in the Army history on the eve of their departure called on the Commander, the pioneer of the project this morning (13) at the Commander’s office and received his instructions and blessings.

The novel conceptual approach, mooted by the Commander of the Army, Lieutenant General Mahesh Senanayake, attaching a greater degree of importance and recognition of their (RSMs) services to the organization, received the blessings of the Ministry of Defence for the new initiative. The move is meant to create and promote a platform for exchange of knowledge in all aspects of military logistics, dependable and fast responses to situations and sharing of Sri Lanka's battle experiences with their counterparts.

During their stay, the Sri Lankan team will learn about Indian Army training modules for RSMs, logistic roles, organizational skills, defence roles and other related spheres of importance.

Lieutenant General Senanayake considering the contribution of Senior Non-Commissioned Officers (SNCOs) in his vision to transform the Sri Lanka Army to that of a capacity-based one, treats those SNCOs as a bridge between Officers and soldiers and believes the facilitation of them for an overseas exposure of this nature would inevitably stimulate development of their leadership, logistic and organizational skills while simultaneously enhancing military diplomacy among regional organizations and countries.

Earlier, two more delegations of RSMs, making a significant breakthrough in direct working relations between own SNCOs and those in the Bangladesh Army and Maldivian Army left to meet their counterparts and returned home having gained extra knowledge on relevant spheres of their duties. 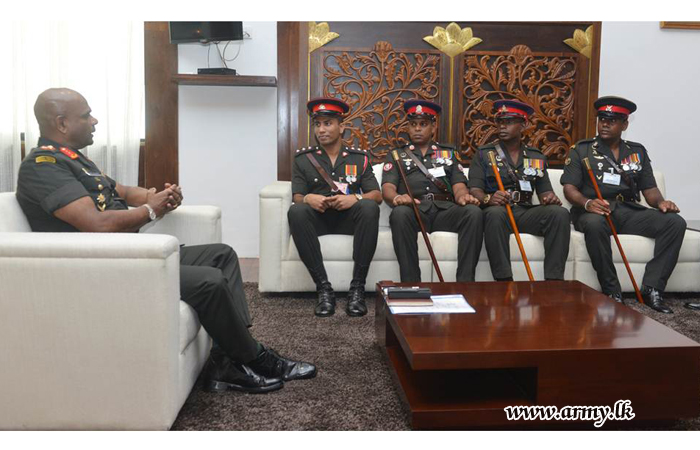