On hearing of a grievance of a War Hero’s widow regarding a grave financial predicament that she had fallen, having taken a bank loan for purchase of their resident home, Lieutenant General Crishanthe De Silva, Commander of the Army recently instructed the Director Veteran Affairs of the Army to immediately look into the matter and provide all possible relief to the affected widow as early as possible.

The said War Hero of 7 Sri Lanka Sinha Regiment (SLSR), a Sergeant in rank, laid his life in the North while fighting against LTTE terrorists, but at the time his untimely death, the family had mortgaged their house against a bank loan of Rs 2 m, expecting to pay it back in monthly installments of Rs 42,000/=.

However, her sudden sickness and subsequent financial difficulties that sprang did not allow her to continue the repayment process, pushing the loan into arrears of more than 30 monthly instalments. The relevant bank in the meantime was in the process of preparing grounds to auction the said house in order to recover their funds in arrears when the Commander of the Army got to learn about it.

Lieutenant General Crishanthe De Silva instructed Brigadier N.A.P.C Napagoda, Director Veterans’ Affairs to promptly attend to the matter. Responding to the Commander’s directive, he invited the affected widow to the office of the Directorate of Veterans’ Affairs and gave a patient hearing to her issue. A few minutes later, on the instructions of the Commander, Brigadier Napagoda handed over a cheque to the value of Rs 5 lakhs to her for resolution of the issue with the bank as an immediate alternative.

The widow in question, expressing her deep gratitude to the Commander of the Army accepted the cheque and promised that she would definitely settle the dues and commence repayment of the loan afterwards. 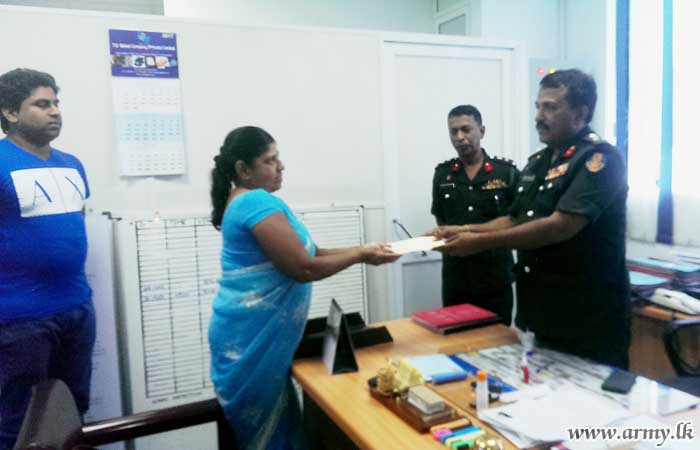